This section contains some shortcodes that requries the Jannah Extinsions Plugin. Install it from the Theme Menu > Install Plugins. 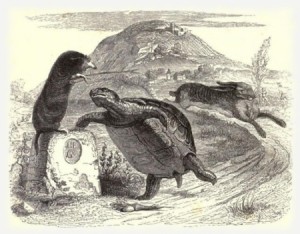 Many of you are no doubt familiar with Aesop’s fable “The Tortoise and the Hare“, but for those who aren’t, here’s a brief summary. In the story an overconfident, and incredibly loudmouth hare is challenged to race by a brave yet incredibly slow tortoise. The race begins and with his brilliant speed the hare flies through the course with ease.  There’s no doubt that victory for the hare should be as sure as God made little green apples, but it seems confidence can be a vulnerability when taken to extremes. The hare’s confidence is shooting so unbelievably high that he stops several times to do things like catching up on some Zs, stopping to chat with some ladies, and of course doing a little frat boy showing off. In the midst of all these distractions, the hare finally remembers that there’s a race going and refocuses his attention just in time to see the tortoise crossing the finish line ahead of him.

While there are many interpretations of what the moral of the story is, the most common one taught to children is that, “slow and steady wins the race”. Of course the fitness nerd in me can’t stop thinking about how the two characters in the story perfectly represent the two core types of running.

Distance Running (the tortoise)  – “Slow and steady wins the race.”

Distance running and HIIT each have have their own set of unique advantages, as well as potential concerns to consider. Taking the time to review the advantages and concerns below can help you decide what type of running is right for you and your goals.

Distance Running – Our buddy the tortoise could be thought of as a “slow and steady wins the race” distance runner. It’s believed that our ancestors first developed the ability to run long distances millions of years ago in order to hunt game. Records of competitive running go back as far 1829 BCE to the Tailteann Games of Ireland, which were held annually and lasted for 30 days. 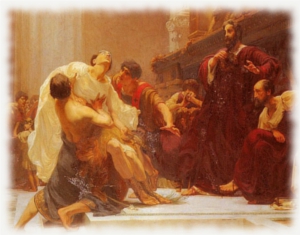 The oldest records found of an Ancient Greek Olympics go back to 776 BCE, records that actually included a list of winners.

As the dust settles on the 2012 Olympic it’s amazing to think that by the end of all the festivities, triumphs, failures, and scandals (what did we do before twitter), athletes from around the world competed in around 300 events. This is far cry from the first 13 Olympic games which featured a SINGLE event called “The Stadion”, which consisted simply of running from one side of the stadium to the other. It’s amazing to think that these first 13 games would lay the foundation for one of the most watched and celebrated fitness events of our time, and it all began with running.

Today distance running is still an incredibly popular sport, and it makes up a large percentage of the fitness crowd, with the most popular format still being the marathon. You can say what you want about “lazy”  Americans, but in 2010 over 507,000 U.S. runners crossed the finish line of a marathon, which is the first time in the history of the sport that the 500,000 mark had been passed. According to Running USA there were 625 marathons in 2010, which is pretty substantial growth from the roughly 200 marathons of 1985!

Fun fact – The average participant in the 2012 Boston Marathon finished the race in 4 hours 18 minutes, and 27 seconds.

The fine folks at the Stanford University Medical Center reported that running appears to offer multiple anti-aging benefits including:

Despite the claims that running is actually hard on the body, their research did not show any evidence to suggest that runners are more likely to develop osteoarthritis, or need knee replacement surgery. I know that may take the wind out of the sails for some who use risk of injury as an excuse not to run, but it turns out that if your knees are bad, they were most likely going to be bad anyway. Thank your parents.

Recent research has indicated that those who engage in excessive endurance exercise may be actually harming their hearts.  The news that Micah True, an ultramarathon runner featured in the book “Born to Run”, had been found dead at the age of 58 from heart disease also sent more than a few shock waves of fear through the fitness community. Most people who are committed to fitness do so because they believe that it holds the promise of both a higher quality of life, and a longer life. It was hard to imagine that the life of someone who was regarded incredibly fit could be cut so short.

Since endurance runners by definition are running much longer distances than sprinters, they spend quite a bit more time exercising than those who chose to get their fitness fix using interval training methods.  Running long distances is more than just a way to get exercise for many, it’s an activity and a challenge that they truly enjoy doing, a way to connect with runner friends, make new friends, etc.  Overall I find that the methods that suit my busy life best are those that produce the greatest amount of results, while consuming a minimal amount of my time. 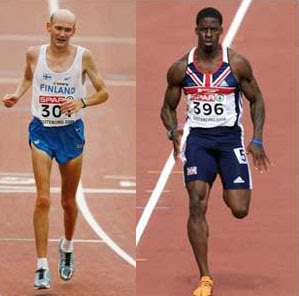 One of the biggest fears that fitness folks have when it comes to doing cardio is the fear of losing the muscle they’ve gained through so much toil and struggle. Running for long-distances causes the body  to enter what is known as a catabolic state, once glycogen or carbohydrate stores are depleted. At this point the physical challenges placed on the body are greater than it’s ability to provide the energy required, and your body can start breaking down the amino acid proteins of your skeletal muscles. All you have to do is look at pictures of top marathon runners and it’s quite obvious that “skinny” seems to get the job done.

Paul Vanderburgh, Ed.D, who is a runner in addition to being a physiologist at the University of Dayton (Ohio), developed something called Flyer Handicap Calculator that they say equalizes the running times of runners of different weights, age, and gender. Based on his research he says that simply losing 5 pounds would improve a half marathon time by 2 minutes and 11 seconds, and a marathon time by 4 minutes and 22 seconds. Doctor Vanderburgh adds, “Lose fat, not muscle”, as muscle loss actually decreased the amount of improvement.

A couple of ways to avoid depleted energy stores are:

High Intensity Interval Training (HIIT) – Of course that would make the wandering, and easily distracted hare our HIIT character. High Intensity Interval Training, or HIIT as it’s often called, is an exercise method characterized by short bursts of intense anaerobic exercise followed by a “rest” phase.  There’s one huge distinction that Will Brink mentions in, “HIIT Training, Are You Really Doing It?” that I think really bears repeating when it come to HIIT.

That is to say if I load up a crazy playlist and head off on a run down by the lake using my trusty Interval App, and I’ve got the settings all dialed in at 2 min rest followed by 1 minute of running. Am I doing HIIT training?

Though the above setup might be and excellent interval training exercise (it is one I actually use), the fact that I’m able to last more than double the 30 second benchmark in my “intense” phase shows that my high is not high enough to be considered HIIT training. High intensity interval training is rooted in the practice of performing at a VERY high level of intensity, meaning that if you can stay at the level for more than 30 seconds, you NEED to kick it up a notch (thanks Emeril). The intensity of the Tabata IE1 Protocol is so high that the entire exercise lasts only 4 minutes! It’s important to remember that HIIT can be applied to just about any type of training, including strength training.

What the heck is Tabata Training?

Tabata Training is a form of interval training that relies on the same method Izumi Tabata used in his wildly popular 1996 study. The Tabata Method, as it’s become known, consists of 20 seconds of intense exercise followed by 10 seconds of rest over a period of 4 minutes (8 cycles).

How intense are we talking about?

The Tabata Method is based on training with an intensity that’s about 170% of your VO2 Max.

A method of interval training that I’m currently using that is similar to The Tabata method is called The Little Method. The Little Method begins with 60 seconds of intense exercise at 95% of your VO2 Max, followed by a 75 second rest. The two intervals are then repeated for 12 cycles.

VO2 Max is said to be one of the best ways to measure your level of cardiovascular fitness, and is a measurement of the maximum amount of oxygen your body is able to use when you perform strenuous exercise.

A 2001 study compared the results of exercising at a steady pace with utilizing HIIT training techniques, and supports several of the conclusions mentioned below

The current consensus is that our genetics ultimately determine how are muscle fibers are divided between type 1 and type 2. Experts still don’t agree on whether or not a person can actually convert type 1 muscle to type 2 and vice versa. It’s a bit like trying to figure out what came first the chicken or the egg? For example, do great sprinters become great sprinters by shifting the make up of their muscle fibers through intense training, or are they simply more successful because they were blessed with more type 2 than type 1? To be continued…

So are you a tortoise or a hare? What are your thoughts/experiences with HIIT training, interval training, or endurance running?

Well, I’m a bit sad to see the Olympics go, but I’m happy for two reasons. To begin with I can start getting to bed at a decent time and rid myself of this “Olympic hangover”, and secondly I feel truly inspired by all the amazing athletes of the world. You all put on a HELL of show, and I commend you for your sacrifice, your dedication, and your overall awesomeness! BIG ups! 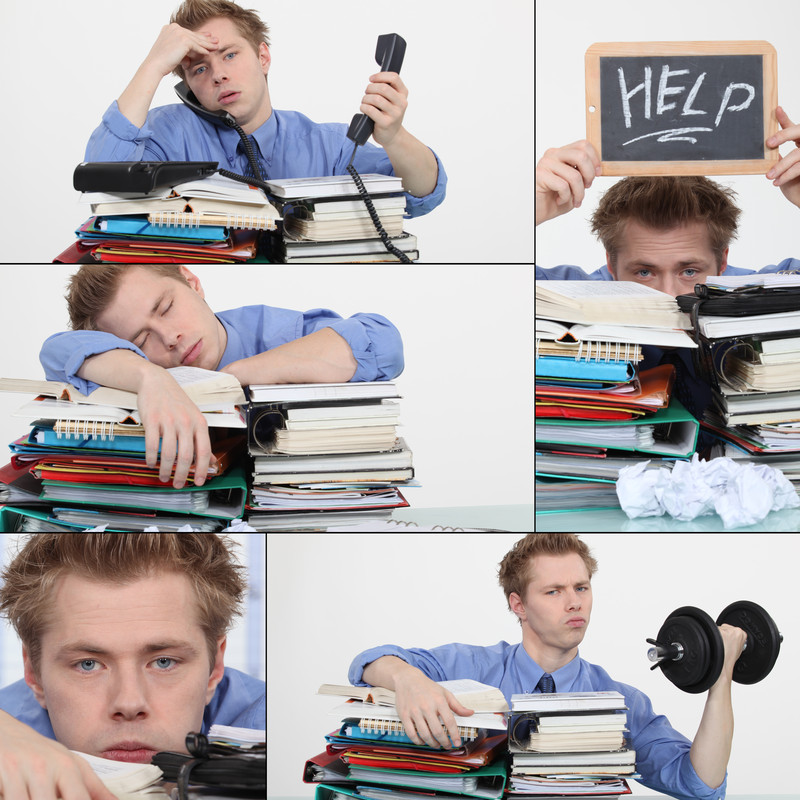 10 Tips To Save Time At The Gym Without Sacrificing Results